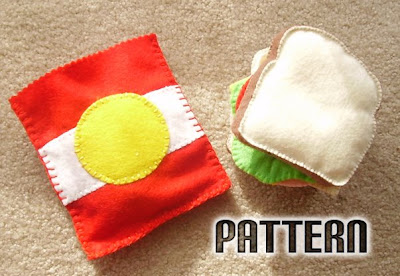 This is a follow up to all the wonderful comments and requests for a pattern for my felt play food. This is a free pattern, made by me, for a sandwhich and a bag of chips. Right-click the following three images and select "Save Target As" and save to your desktop. Then from there you can print these images full size. 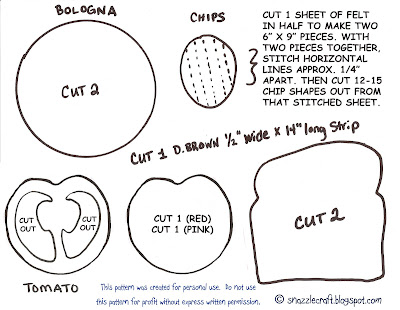 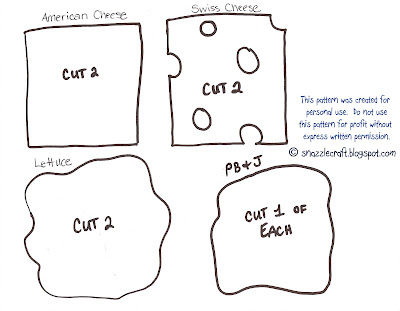 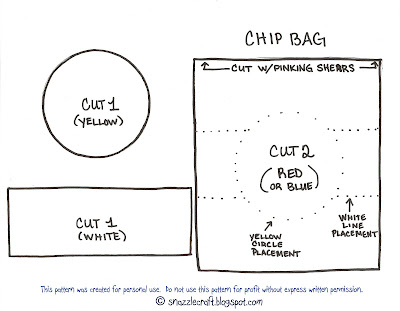 Basically the construction on these is pretty simple. Everything was handstitched using embroidery thread matching the color to the felt. I only used two threads of the embroidery thread in most cases and I used a blanket stitch on everything. the only exceptions to this are the chips and the chip bag. I whip stitched the yellow circle and white line onto the red bag but I did a blanket stitch to attach the two bag pieces together. **NOTE: You could add a little velcro to the opening of the chip bag if you want it to "close". However, I did not.

Potato Chips and Bag:
The chips were the only thing that were not handsewn. The chips were made by first taking one sheet of felt and cutting it in half to make two sheetsthat measured 6"x 9". Then I placed them together and loaded the sewing machine up with a matching thread color. Then I placed the presser foot along on edge. I sewed vertically following the short (6") end. After I sewed that first line, then I moved the presser foot and placed it up against the first line and used that line as a guide. I continued until the entire sheet was stitched with evenly spaced lines. Using this method the stitch lines end up being about 1/4" apart. Then I used the chip pattern (the cutout shape from the pattern sheet) and laid it on top of the stitched sheet of felt and started cutting. You want to make sure your lines run vertically and are centered correctly on the chip (see the pattern drawing for a rough guide). Because the felt has all the stitching, the chips can be "curled" to look like real ruffle chips!!

Sandwich:
For the sandwich, cut 4 pieces of felt for the white bread parts. I wrote on the pattern to cut two strips of dark brown felt in a 14" long by 1/2" wide strip. In order to do this and get it to fit on one sheet of felt, you will have to cut it out on the diagonal. It will take two pieces of felt to do just this part. But don't be discouraged! Save those scraps! They will come in handy for future felt projects I am sure.

Blanket stitch the brown strip onto one side of the white bread part. You can start in the middle of the bottom of the piced of bread or you can do what I did which is start in one of the indented parts of the side. When you go to handstitch the second white bread piece on, leave an opening large enough to stuff batting in. I just used regular Poly-fil. Try not to overstuff it or you will get puffy, swollen looking bread.

Swiss Cheese:
This was pretty simple. I just blanket stitched the holes first (it is easier to hide your starter stitches that way). The I stitched the two cheese pieces together along the outside. That's it!

Lettuce:
I blanket stitched the outside first. Then I hand basted the main "vein" going from one end to the other. Make sure that you get a good secure knot to start. Then when I got to the other end of the lettuce, I pulled the thread to get the rippled effect. Don't pull too tight, it doesn't take much to get the ripple effect. I added a few more veins coming out from the main one also using a hand sewn basting stitch but those were decorative and I did not pull those tight. Do what you feel looks best. Some of the veins may need to be pulled a bit to get the lettuce effect that you like best. Having the rippled effect with the basting stitches and not leaving the lettuce flat really gives the lettuce a realistic look and gives it a more three-dimensional look.

Tomato:
This was one of the harder components of the sandwich. I recommend cutting out the parts with an Exacto knife. The tomato consists of three parts. The back is red, the middle is pink, and the top is the red cutout piece. First whip-stitch the red cutout piece onto the pink piece but only stitch the middle parts NOT the outside edge. Then I just stitched some "seeds" using the same read embroidery thread that I just stitched the pieces together with. Then put the back red piece on and blanket stitch the pieces together.

Other Sandwich Parts:
The rest of the parts were all just blanket stitched except for the peanut butter and jelly. Those were a single piece of felt cut out using the pattern.

You can check out the completed pictures here: http://snazzlecraft.blogspot.com/2008/12/sandwich-and-chips-felt-play-food.html

Awesome tutorial! I might have to try this once my niece gets older :)

Great tutorials, thanks for the patterns! I love making felt food!

I haven't made them yet, but thanks for these patterns. I am from the SB area too! Though, not living there currently. nice to see someone out there from SB! your blog looks great, I am going to subscribe! Thanks again

this is way too cool!

Your felt food tutorial is fantastic!! Thanks for sharing with us :) I've included a link from my blog under the 'Felt Food' section: http://feltorama.blogspot.com

Hello!
I really like your how to. I was wondering if I could translate it in French and add it to my list of how to as explained in my french post (http://www.petitcitron.com/index.php/form_howto.html)
Of course, your website would be quoted and there would be a link!
Thank you,
Perrine

Thanks for sharing! I just made some swiss chard from recycled sweaters. Love your recycled ideas too!

thanks so much for the tutorial. I have been looking for somebody nice enough to post tutorials of just this food for my 3 years olds Christmas food. I am excited about miking felt food for her. I have only about a month so I'm about to hop to it.

Hi, im new . This Websites fantastic, I have learned tons from here already!

Thanks for this fantastic tutorial. I have made 3 sets of these sandwiches for my kids and a gift. They look great.
I just wanted to let you know that I put a link to this on my blog. Thanks again.

I am starting a new blog called “The Petite Cafe” (http://thepetitecafe.blogspot.com/) devoted to felt food. I have begun compiling all the best felt food tutorials and I was hoping to have your permission to use your picture of your completed felt lunch on my blog with a link back to your site. It is so cute!

Thanks so much,
Sarah

I found you on Craftster. I love your sandwich! I'm definitely going to make one!

Hi...I'm Laura from Italy; I also made felt food

I'd like to invite you to visite my italian blog... Laura

Hi, my name is Tracy and I live in sunny Queensland, Australia. I have recently used your felt food patterns to make some for my kids new cubby house. They have proven to be VERY popular!! and I have friends wanting me to market them. I own a business called Flutterby Doll Creations and Bargains where I am selling dolls clothes, tailor and homemade, also homemade items for babies and children. My hubby lost his job last year two weeks before our 3rd baby was born, and we have struggled ever since. I have weaned my 12 month old onto goats milk during the day, so I can return to teaching. My hubby works 12 to 14 hour night shifts then looks after the baby all day while I'm at work. Some days he has both our boys and thankfully our daughter is at school. I am writing to ask your permission to sell felt foods made with your patterns to help bring us in some much needed extra money. Please let me know. Kind regards,Tracy.
PS you can find my business Flutterby Doll creations and Bargains on Facebook, or @ Flutterbydollcreations.wordpress.com. I would be happy to link to your blog and credit you for patterns (if you could tell me how to do this as I'm not 100% sure)

Thanks so much for this free pattern!

I've linked to this entry in my blog:
http://thezombiecrafter.blogspot.com/2010/07/free-felt-chips-sandwich-pattern.html

It's a nice craft. The idea is very good, and it looks so very colorful.

So cute. Thanks for the tutorial and the templates!

That looks so much like a sandwich it made me hungry! *Laugh*

Thank you for all the great templates and tutorials. I recently made felt food for a friend's 2 year-old daughter!

Aww I love it!

Deff going to try this out, thanks.

I will put it in my bread bin when its empty as a joke!

I love your felt food! I'm hosting a Felt Food Round-Up at OneCreativeMommy.com Friday, May 18th. I'd love it for you to link something up!

Thanks for this fantastic tutorial! (I made it.)

I'd love for you to link this (and any other felt projects you'd like to share) up at my Felt Food Roundup on OneCreativeMommy.com. I hope to see you there!

I know I said I was hosting one months ago, but my site was too new, so I cancelled it. This time it's for real!

Good day I am so glad I found your website, I really found you by error,
while I was searching on Yahoo for something else, Anyhow I am here now and would just like to say
cheers for a marvelous post and a all round entertaining blog (I also love the theme/design),
I don’t have time to go through it all at the minute but I have saved
it and also added your RSS feeds, so when I have time I will be back to read a great deal more, Please do keep up
the superb jo.

Thank you! For the free pattern. I know I am coming in way late in the conversation, but if you have a chance to sell,by all means sell. I teeter tottered a lot when I started selling jewelry. Selling your wares is always a good feeling. I am a mom of four so killing two birds with one stone is how I looked at it. I make for my kids and sell the rest :) Have a great day!

I love you cute ideas ♥ http://felting.craftgossip.com/2013/11/30/free-felt-food-pattern-and-easy-Santa-beard/

Thank you so much for the patterns! I made some of my own and linked your post to my blog!

All true artists, whether they know it or not, create from a place of no-mind, from inner stillness.
::: Eckhart Tolle ::: 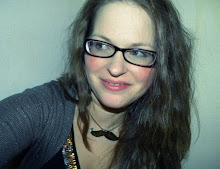 I am rockin' the mustache necklace. Oh Yeah!

Hey you, link me!